A word about bêtes: in so relentlessly English a novel, in which an outside world is scarcely even mentioned, it is never explained why a French word should be chosen to identify the talking animals. It makes them foreign, alien, but in a work that has more wordplay, puns and malapropisms even than is usual in an Adam Roberts novel, we have to take note of things like this. I suspect, therefore, that we are intended to hear an echo of ‘bet’ in the word, the novel details a huge gamble about the nature of consciousness and the future of humanity.

The same with editors–my editors at Orbit didn’t ask me to change the pronouns at all. It was, rather, one of the things they’d really liked about the novel. […] My takeaway from the whole experience is that laundry lists of what’s “commercial” or not aren’t actually terribly helpful, not in and of themselves. I am not a fan of aspiring writers worrying too much about whether their work is commercial or not, not because I have any sort of disdain for the commercial (I like to sell books as much as the next person!) but because what sells or doesn’t isn’t really that easily predictable.

Saturday morning’s post brought with it Vector 265, at long last. Not just Vector: the mailing includes a booklet in memory of Rob Holstock, edited by Niall Harrison; the BSFA Awards booklet, with all of the shortlisted short stories; and a ballot for voting on the BSFA awards.

Vector 265 is the last one edited by Niall, and it’s a hefty one, a rich tribute to Stephen Baxter, plus book reviews, edited by Martin Lewis. For those of you not currently BSFA members, here is what you’re missing out on:

Anyone who joined the BSFA recently may end up with the wrong impression as to how frequently mailings occur, inasmuch as we expect the next one to be sent out within the next month-or-so. It’s all still quarterly, however.

Vector welcomes letters of comment, or feedback on the forum.

The BSFA is pleased to announce the shortlisted nominees for the 2010 BSFA Awards. 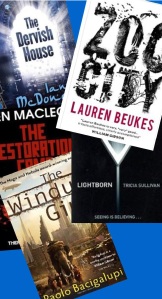 The BSFA Awards Administrator will shortly make a voting form available for members of the BSFA and this year’s Eastercon, who will be able to send advance votes based on the above shortlists. Advance votes must be received by Monday 18th April. After this date, ballot boxes will be made available at Illustrious – the Eastercon Convention taking place at the Hilton Metropole in Birmingham. The ballots will close at Midday on Saturday April 23rd and the winners will be announced at a ceremony hosted that evening at the convention.

Congratulations to all of the nominees!

Not much discussion about this story out in the wilds of the internet, or at least, not that I could find; just James:

As I can’t, as yet, put down my thought in a coherent sense, I’ll resort to lists. Please forgive me.

The downsides of the story in my opinion are:

— Large chunks of infodumpy-ness. It’s a short show, with a lot of tell.
— Complicated religious arguments. For someone not versed in religion, or even used to thinking about religion, it can be difficult to follow.

So, is there too much crowding into this story? Is it actually going anywhere? Or is it suggesting that it all comes round again, no matter how far into the future you go? Human/post-human impulses being what they are, we/they inevitably pursue certain ideas, certain tracks, same thing, different version? Or is he suggesting that no matter how much you try to strip life of meaning in order to survive, in the end you need meaning in order to survive.

And I think that means I like this story, because it engages me intellectually in a way that most of the others so far haven’t. It is making me think about what I believe in. I’m not sure if that is something I actively demand of fiction, or rather, I’ve not been aware in the past that I demand that of fiction (and sometimes, shock, horror, I really do just want to be entertained) but this story seems to be inviting me to take up a discussion.

But I still think it has some structural problems.

This week’s story for discussion: “A Tulip for Lucretius” by Ken MacLeod. Roll on Sunday.

Live! Via text messages from Liz. The nominees. And the winners are …

Congratulations to all the winners!

I am usually underwhelmed by the Hugo short story nominees. I accept that my tastes are out of step with the pool of Hugo voters, as I am not a big fan of Michael Burstein’s short fiction, and the less said about most of Mike Resnick and Robert J. Sawyer’s previous nominees the better, but the one time I voted in the Hugos I put No Award first as a protest against how uniformly terrible the stories on that year’s ballot were. So it’s pleasing to report that the short stories, while not all great, range from pretty decent to really pretty damn good. Here’s my ranking:

Bottom of my ballot I would put Mike Resnick’s ‘Distant Replay‘. It’s the best Mike Resnick story I have ever read, and that’s why it wouldn’t end up below No Award, but the appeal of his work remains a total mystery to me. Yet another story about science fiction being used in some way to reunite a man with his love, (in this case, a man meets a young man and woman who are exactly like him and his (dead) wife, and hooks them up), it’s less cloyingly sentimental than usual and has a couple of nice ideas, and that’s about it.

‘A Small Room in Koboldtown,’ by Michael Swanwick, is a locked-room mystery noir in a fantasy setting. The internet informs me it’s a universe he’s written in before, and the setting is interesting, but then it uses the fantasy setting to pull a big cheat. I like mysteries, and they work best when they are clever enough that you can’t work out exactly how it was done but all the clues are there. When the resolution of the mystery is a magical solution I couldn’t predict, I feel cheated out of my ending.

Having dispatched with the bottom two, we get to two stalwarts of the UK SF scene who are harder to separate – Ken MacLeod’s ‘Who’s Afraid of Wolf 359?’ and Stephen Baxter’s ‘Last Contact.’ Who’s Afraid of Wolf 359? is space opera from Ken MacLeod, in the same setting as his BSFA-award-winning Lighting Out. Proper hard SF, it has AIs and seedships and lots of future civilizations, I can’t quite put my finger on why I don’t like it as much as I expected. I think it could do with being longer, to flesh out the events around the ending, and give us more of the central character. There’s just nothing which particularly grabs me, so I put it at number three.

Last Contact is a very English disaster story – the big SFnal idea is the end of the world, but the story is about two women preparing for the end in Oxfodshire, planting flowers that will never grow and sitting in the garden drinking tea while they wait for the ground to be ripped apart under them. It’s a cosy catastrophe, with a much lower degree of looting and general chaos and anarchy than what I think would actually happen if you announced the world was going to end in six month’s time, but I found it rather charming. I don’t think Baxter quite pulls it off, but it’s in second place for me.

My pick of the short stories is Elizabeth Bear’s ‘Tideline,’ which is a great example of how a small SF idea can turn into a lovely story. Lovely is the appropriate word, as it’s a heartwarming little tale of a shipwrecked war-machine, alone on a beach mourning her lost compatriots, and the human boy she meets and takes care of. The hints of worldbuilding fit around the well-drawn characters, filling out enough of the background to satisfy but leaving parts of it unknown, and Bear’s prose is probably the best of all the stories, bar maybe the Swanwick. It pulls off beautifully what Last Contact can’t quite do.

So I’d like the Best Short Story Hugo to go to Elizabeth Bear, but I won’t be upset if it goes to MacLeod or Baxter.

It may look as if everything is normal, but actually, I’m in Switzerland, where I’ve just had an absurdly early breakfast in anticipation of a long day’s work. But I’ve found time (and some internet) to bring you the shortlist for the 2008 Arthur C Clarke Award anyway. (OK, I wrote most of this post at the weekend. But the principle stands.) Am I good to you, or what?

Featuring visions as diverse as a dystopian Cumbria and a future Hackney, time-travel adventures in 1960’s Liverpool and an alternate world British Isles in the throes of terrorist attack, through to tech-noir thrillers and a trawl through subconscious worlds where memories fall prey to metaphysical sharks, the Clarke Award has never been so close to home and relevant to the British literary scene.

The Clarke Award has always been about pushing at the speculative edges of its genre. It’s one possible map amongst many, never the whole territory, and this year’s shortlist stands as both the perfect introduction to the state of modern science fiction writing as well as a first tantalising glimpse of possible futures to come.

And those books? Read on.

The H-Bomb Girl by Stephen Baxter

The Carhullan Army by Sarah Hall

The Execution Channel by Ken MacLeod

(When everyone in the UK’s woken up, there may well be some discussion here, here and here.)