Reviewed by Paul Graham Raven. This review first appeared in The BSFA Review.

You might know Tim Maughan for his BSFA Award-nominated story “Havana Augmented”, or for his lengthening list of by-lines on articles about the imminent future. (Or perhaps for his caustic yet compassionate presence on the birdsite.) But from now on, you should know him for his debut novel Infinite Detail, a tapestry of near-term prognostication that stuns you with its contextual implications, while its streetwise prose gets to work on picking your emotional pockets.

“You would say that, Paul,” I hear you mutter, “he’s a friend of yours.” Well, that’s true – but you should see the thousands of words of seething envy I discarded in the process of drafting this review, and read some of the blurbs from writers far better known than me. I say it because I believe it; if I didn’t, I’d say nothing. It’s a question of trust: do you consider me honest, or am I just another algorithm in the surveillance-consumerism panopticon? (Answers on a postcard, please.)

This is a central issue in Infinite Detail, which is – at least in part – about the mediation of social relations by global infrastructural networks of inscrutable complexity. It’s not just about who (or rather what) you trust to recommend things, but who you trust to keep you safe, to keep the lights on and the shops stocked. In a very-near-future Bristol, a gang of smart young techies and artists have reached such a point of distrust that they start trying to build an alternative system… and in the same world, a handful of years later, everyone is dealing with the consequences of another group of smart young techies having decided that the best solution was to throw a global kill-switch and hope it all comes out in the wash. (Spoilers: it doesn’t all come out in the wash.)

Infinite Detail is an angry, tragic plea for a more intimate and local sort of connection than we’ve become accustomed to. It’s perhaps also nostalgic for a lost past in a way that might seem unimaginable coming from a relatively young writer… until you think back to the 1990s (if you can remember them) and recall, with a sharp lurch of anxiety and confusion, how different the world now seems. But that’s actually an illusion, and Maughan and I (and others of our generation) are just now getting our own serving of the futureshock that so animated middle-aged people in the 1970s, the golden age of the critical utopia in sf. That movement was a bitter yet hopeful flinch from a transformation which must have felt sudden and totalising, but was really just the first flourish of a long, slow three-card trick: ARPANET, microprocessors, containerised logistics. Infinite Detail is about the end of that game, which not even the house can win in the long run.

It’s not unremittingly dark; there’s as much hope here as in Gibson’s The Peripheral, if not more. But in both cases, it’s a hope that emerges from Pandora’s box, among a flood of horrors which cannot be re-contained. The ghost at the feast is climate change, of course – but it’s in no way a work of denial. Instead of using the warming world as his backdrop, Maughan has foregrounded the global machine whose consequences are climate change: the optical fibres and sub-arctic server farms, yes, but also the mines and power stations, the retail palaces and container ports, the logistical systems which create and distribute the disposable crap that arrives to fill our jam-packed lives before we know we want it.

It’s a novel of failed utopias, then: the technological utopia of Silicon Valley, whose gloss is turning to tarnish, but also the counter-utopia which is its negation. Maughan locates this latter in Stokes Croft, the gentrified but defiantly countercultural zone of Bristol which is his personal Mecca: a vibrant strip of street art, galleries and hipster hangouts whose cool is nonetheless parasitic upon the overlooked poverty of the city’s underclass, from whom much of its now-mainstream cultural cachet – hip-hop, drum’n’bass, grime, graffiti – was originally appropriated long ago.

It’s about the failure of utopias, but it’s also about why utopias fail: about the cruel efficiency of networks, and the role of power and significance therein, but also about the cruelty of removing them suddenly without an adequate plan for their replacement. It’s billed as a novel of “the end of the internet”, but it’s important to understand that “the internet”, despite the reductive way we talk about it, isn’t just Twitter and Snapchat and smartphones but, well, everything – the systems that feed us, light us, keep us warm and connected, keep us from a life of clothes patched and re-patched over decades, from jerk-seasoned seagull roasted over an oil-drum barbecue. And it’s scary, because it’s true… though I wonder if it reads as far-fetched to anyone who hasn’t spent the last decade learning how this stuff all fits together.

But therein lies the redemption of the bits of the book that can feel a little like lectures on the fragility of our hypermediated just-in-time-and-always-on society: in a sense, this is the hardest of hard science fiction. There’s nothing in Infinite Detail which isn’t plausible as well as possible; Maughan knows networks and supply chains inside out, and that knowledge is reflected in the Janus faces of awe and horror with which the novel considers the crystallisation of a world which we don’t yet quite inhabit, but are nonetheless rushing toward with arms open and eyes closed. So read it as a cautionary tale – but read it also as a searing debut novel from a writer who couldn’t be more relevant to these troubled and troubling times. You can trust me on that. 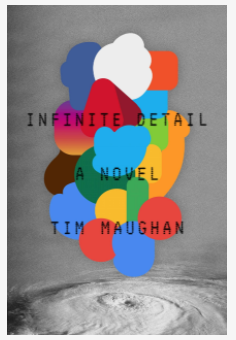 Immediately the protesters’ drones start to drop lower, arrows scrolling across their screens to shift the march’s route, and new cues rattling from speakers to realign the chanting.

Rush spots a couple of cops behind the main line not wearing headgear, senior officers or strategic management agents, and blinks to grab images of them, storing them away to run through image-search algorithms later. Until you can dismantle them, he tells himself, always use the oppressors’ tools against them.