Lucian is sometimes referred to as the first author of a journey to the moon. It’s not true on either count. He wrote two, not one, moon journey tales; and his work includes just the oldest surviving moon journeys, not the oldest per se. He himself mentions older ones.

Lucian lived in the second century CE and, among his other accomplishments, was a prolific writer. Eighty or so of his works survive, including the Icaromenippus and his better-known moon journey, The True History. Not only is The True History a longer and more wide-ranging work, but it was to later help inspire More’s Utopia and Gulliver’s Travels, among other things.

Out of this World: Science Fiction but Not as You Know It includes a 1647 Dutch edition of The True History.  The image from it released as part of the publicity packet for the show is of an action-packed moment in the plot, the people of the Moon and the people of the Sun at war for the right to colonize the Morning Star. Their aerial battle is fought on an enormous battlefield woven by enormous spiders (each much bigger than the Cyclades islands), and the warriors, many of them half-food, half-creature, attack in a fraught, prolonged combat sequence. Note the cabbages, the lethal radish, and, in the lower-left, the Millet-shooter. 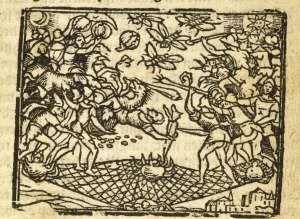 Both The True History and the Icaromenippus are highly readable and fairly short. At Tony Keen‘s recommendation, I used the Oxford World Classics edition, Lucian: Selected Dialogues, translated by C.D.N. Costa (2005).

Out of this World: Science Fiction but Not as You Know It, curated by Andy Sawyer, traces science fiction from Lucian to Lauren Beukes. There are six days left, including today, in which to catch it (for free) at the British Library. Today, the library is open until 20:00, so if you work in central London, you may even be able to drop by after work to see it.

4 thoughts on “Out of this World: Six Days Left / Lucian of Samosata”