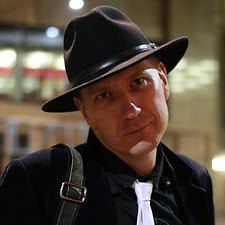 The 2015 BSFA Lecture at Dysprosium (the 2015 Eastercon) will be given by Dr Simon Trafford (Institute of Historical Research), and is entitled ‘“Runar munt þu finna”: why sing pop in dead languages?’ The lecture will be given at 5.30 pm on Saturday April 4th, in the Discovery room of the Park Inn, Heathrow. The lecture is open to any member of Dysprosium.

Simon Trafford is Lecturer in Medieval History and Research Training Officer at the University of London’s Institute of Historical Research. He specialises in the history and archaeology of the later Anglo-Saxon period in the north-east of England. He completed his undergraduate studies and his D.Phil. at the University of York, where his supervisor was Professor Edward James, who sf fans know as current Chair of the Science Fiction Foundation. Simon has a particular interest in the depiction of Vikings in popular culture. His talk for us develops this, with a special focus upon the use of dead ancient and medieval languages in pop and rock songs.

The BSFA Lecture is intended as a companion to the George Hay Lecture, which is presented at the Eastercon by the Science Fiction Foundation. Where the Hay Lecture invites scientists, the BSFA Lecture invites academics from the arts and humanities, because we recognise that science fiction fans aren’t only interested in science.  The lecturers are given a remit to speak “on a subject that is likely to be of interest to science fiction fans” – i.e. on whatever they want!  This is the eighth BSFA Lecture.