The Hidden Oracle, Book One of The Trials of Apollo series by Rick Riordan (Disney Hyperion, 2016)

The Dark Prophecy, Book Two of The Trials of Apollo series by Rick Riordan (Disney Hyperion, 2017)

Winner of the 2016 Goodreads Choice Awards: Middle Grade and Children’s, The Hidden Oracle begins the next adventures in the Camp Half-Blood Chronicles. The Hidden Oracle and The Dark Prophecy are the first two books in The Trials of Apollo pentalogy by New York Times #1 Best-Selling Author, Rick Riordan. The Camp Half-Blood Chronicles is primarily made up of three five-book series. The first two, Percy Jackson and the Olympians and The Heroes of Olympus respectively, follow the adventures of twenty-first century demi-gods, teenage children of mortals and either Greek or Roman gods/goddesses. In this third series, Riordan does something different, focusing instead on the adventures of the god Apollo.

At the end of The Heroes of Olympus, Apollo is blamed for the problems the heroes have had to resolve. This third series picks up a few months following the events of the second series with Apollo’s punishment beginning with him falling from the sky and crashing in an alleyway dumpster. At first Apollo’s punishment appears to be one simply designed to humble him: he is transformed from a beautiful, powerful god to an awkward, acne-covered teenaged human. He is then further humbled when a couple thugs beat him up, when he is forced into the servitude of a young girl named Meg, and when he realizes that he is exceptionally less talented at music and archery than when he was a god. His inner-struggles throughout the narrative consist of a conflict between his over-zealous ego and his melodramatic horror at his newfound limitations. But Apollo also faces exterior struggles, and it is in these conflicts that he learns that his punishment is not just to be humbled, but also to right previous wrongs. Apollo must save five missing oracles and stop a secret organization called the Triumvirate. The Triumvirate is made up of three re-born Ancient Roman Emperors who have been pulling the strings in the background all along, causing all of the problems of the Camp Half-Blood Chronicles.

In The Hidden Oracle, children at Camp Half-Blood, a secret camp for demi-gods, are going missing. One by one they head into the forest as if hypnotized and are never seen again. While previous heroes in the Chronicles have travelled far in an American road trip-style adventure, in The Hidden Oracle Apollo does not need to travel farther than the forest neighboring the campgrounds. This changes the structure of the narrative from the previous books. Apollo is able to head back and forth between the forest as site of adventure and the campgrounds as site of respite, healing and communicating with aids. Furthermore, while previous books touch on the other campers only briefly, this book spends a great deal more time getting to know the people who live at camp year-round. This includes three of Apollo’s children, adding another interesting dynamic to this book, a greater focus on the relationships between demigods and their godly parents, something that is only touched on briefly in the first two series. 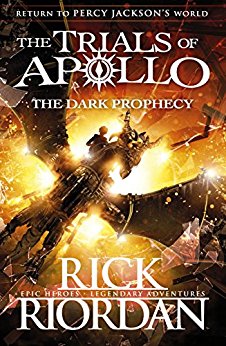 The sequel, The Dark Prophecy, follows Apollo’s quest to save both his friend and all of Indianapolis from the control of the Triumvirate. This book follows a similar structure as The Hidden Oracle. While the characters travel from Long Island Sound to Indianapolis for this novel, and thus there is the potential for a road trip-style structure that the original two series of the Chronicles use, this book begins at the end of the journey, as the characters are arriving in Indianapolis. Within the first few chapters, the heroes are lead to a magical hideout called the Waystation, which functions in the same way as Camp Half-Blood in The Hidden Oracle. The heroes go back and forth between fighting their enemies in Indianapolis, and re-grouping and healing at the Waystation. During these adventures, Apollo and his friends team up with a variety of different species, adding interesting new group dynamics unexplored in previous novels of the Chronicles.

Both The Hidden Oracle and The Dark Prophecy feature intense final battles that take place in Apollo’s space of respite and safety, Camp Half-Blood and the Waystation respectively. Unable to go home on Mount Olympus, every home that Apollo tries to make for himself on his adventures is attacked, almost completely destroyed and becomes the site from which he must leave to continue his important mission to stop the Triumvirate. It is also from here that he meets and joins forces with previous heroes from the Chronicles, including Leo Valdez and Grover Underwood, suggesting, perhaps, that what is truly valuable is not the place called home, but rather the people we call family.

On the topic of family, one of Apollo’s sons, Will Solace, is dating a boy named Nico Di Angelo, a central character from the previous two series of the Chronicles. There are very few LGBTQ+ characters in middle-grade children’s fiction; three of them are in The Hidden Oracle. In The Dark Prophecy, a lesbian couple runs the Waystation, and the main villain is Apollo’s ex-boyfriend. The book uses frequent flashbacks to focus on the relationship between Apollo and his ex-boyfriend. Apollo is bisexual, making him very much a rarity as a same-sex attracted first-person narrator in a children’s fantasy novel. With six central LGBTQ+ characters, a wide range of ethnicities represented, and explicit feminist ideals, these books work very well to present progressive ideologies and a diverse representation of characters.

While reading the other ten novels in the Chronicles allows for a greater appreciation of The Trials of Apollo, this is not entirely necessary in order to follow the story. These books work well to begin a new, exciting series in Riordan’s universe. The adventure continues in The Burning Maze, which will be released in May 2018.