The term “fully automated luxury communism” (or FALC) first began circulating among far-left internet commentators in the mid-2010s as a name given to one potential form of post-scarcity economy. Alongside a number of variations (such as “fully automated luxury gay space communism”, or FALGSC, which inflects the term with post-gender and post-sexuality connotations),

FALC gained wider recognition following a Guardian write-up in March 2015 that discussed the origins and significance of the term. Aaron Bastani—a British political commentator and co-founder of Novaro Media, an independent left-wing media outlet—was interviewed as part of that article, and has since become the key intellectual figure associated with FALC. The current work is Bastani’s attempt to unpack the meaning and implications of FALC.

Fully Automated Luxury Communism opens in a distinctly science-fictional manner, with a series of five “near-future” scenarios. These range from the reflections of a Chinese factory worker concerned about the flight of manufacturers back to the US, where labour has become cheaper, through an encounter between a police officer and the owner of an illegally “modified” dog, to a WhatsApp conversation among a global group of billionaires eager to jump on the latest capital investment venture: asteroid mining. 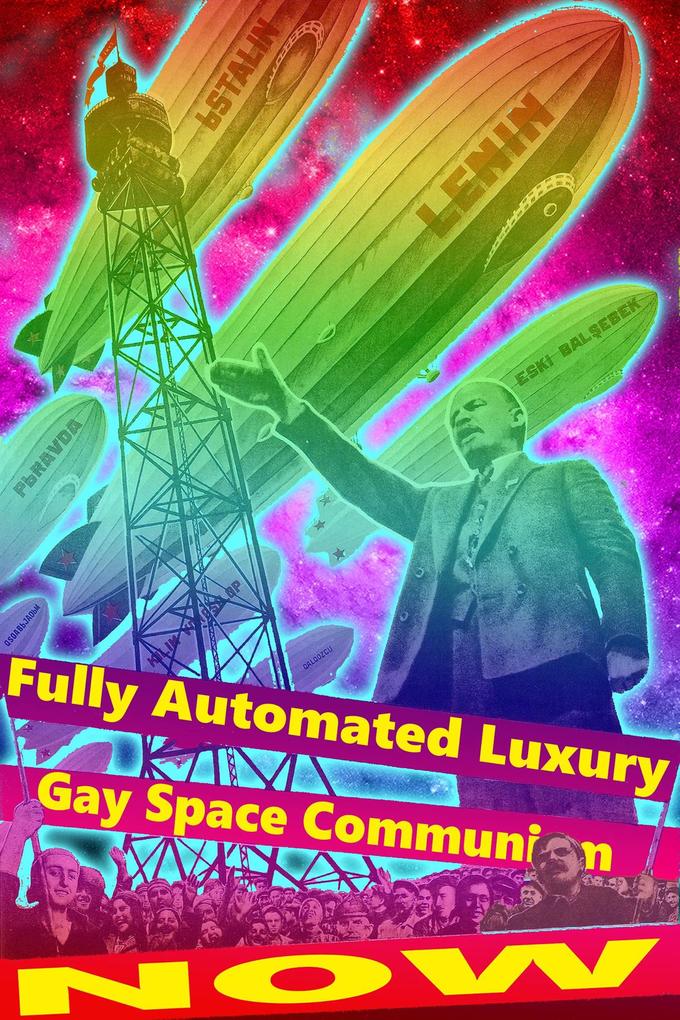 Together, these scenarios demonstrate what, for Bastani, will be some of the key technological and political trends of the coming decades: increasing automation, resulting in ever-cheaper labour and the loss of traditional jobs; the growing importance of information, whether in genetic or digital form, as the key economic and political resource of late capitalism; and the slow shift towards a post-scarcity world where such material resources as minerals and energy will, through technological innovation, be made abundant. While such trends may be inevitable, Bastani argues, our response to them need not be. Instead, he argues that our current technological moment offers a unique opportunity to reject the failing politics of neoliberal capitalism, in freefall since 2008, and instigate a new form of social organisation.

That new form is “fully automated luxury communism”, a kind of high-tech communism wherein the advent of automation allows for the possibility of a life of abundance for all. Bastani’s argument runs broadly as follows: Human society is in the middle of a “disruption”, a seismic shift in the technological paradigms that underpin social and economic relations. The previous two disruptions, according to Bastani, comprised the development of agriculture ten millennia ago and the Industrial Revolution in the eighteenth and nineteenth centuries, both of which radically reformed the political and technological organisations of affected societies.

Bastani’s historical categorisations here are somewhat selective, and it is perhaps necessary to view the “Three Disruptions” model more as a useful symbolic framework for couching his argument than a precise account of the contours of European human history. Regardless of the precision of this framework, Bastani makes a strong case for the unique nature of the current technological moment. The indicative technologies of the “Third Disruption”, he suggests, are the “modern transistor and integrated circuit”, devices which have allowed for exponential—rather than linear—technological development and the growth of automated labour, smart devices, the internet of things, driverless cars, and any number of other momentous innovations in the technological infrastructure of everyday life.

Whereas many on the left have viewed the growth of automation with trepidation, Bastani instead sees the potential for radical change. After an initial discussion of the form and nature of the Third Disruption, Bastani turns to outline the utopian potential of such new technologies to free individuals from the need for excessive labour. As in Bellamy’s Looking Backwards, or Wells’s A Modern Utopia and Men Like Gods, Bastani suggests that such a utopia will be achieved through the embrace, not the rejection, of technological change. The state of post-scarcity towards which much of global humanity is slowly edging—and Bastani is careful to elucidate the different trajectories faced by nations in the Global North and Global South—is, he suggests, not inextricably bound up with the logic of private enterprise, profit motives, and resource scarcity. Instead, he calls for the dismantling of the pillars of capitalist realism and a political shift towards utopian emancipation from private greed and artificial scarcity.

Visions of post-scarcity societies are, of course, not uncommon in SF—indeed, the Wikipedia article on “Post-scarcity economy” (which also contains a reference to FALC) lists a number of fictional depictions of such societies, including Iain M. Banks’s Culture series and Kim Stanley Robinson’s Mars trilogy. Bastani, however, makes little reference to speculative works—perhaps surprisingly, given that much of his own work engages in just such speculation. Indeed, perhaps his closest literary correlates are the futurological works of writers such as Wells or Stapledon, with their conjectures on near-future political and technological developments.

For example, in his outlines of the possible future of global energy distribution, and the projected shift over the coming decades towards solar and wind as post-scarcity forms of energy generation, Bastani displays the same kind of giddy optimism regarding the creative potential of technological progress as may be found in the sociological-cum-literary works of these earlier writers. But whereas the first two sections of the book are respectively concerned with outlining the three “disruptions,” and the various forms of post-scarcity technologies that are likely to emerge over the coming decades, it’s in the final section of the book that Bastani turns towards the potential means of actually achieving FALC. Here is where Fully Automated Luxury Communism most clearly straddles the divide between political pragmatism and utopian anticipation.

One feature of capitalist realism is that the very word “utopian” often has connotations of idealistic political naïvety. Yet the project of envisioning large-scale social and political changes demands a strong element of utopian ambition. So it is very constructive that Bastani’s call for radical political upheavals is here tempered by his strong grasp of local and national politics (at least in a UK context). To the skeptic in each of us, “fully automated luxury communism” may seem impossibly far away. But the longest journey begins beneath one’s feet, and Bastani gives a credible account of what the first steps might be.

For example, he suggests three pillars of social action—strong municipal protectionism, people’s banks, and universal basic services—as starting points for a shift away from market-based governmental forms. Such developments, he goes on, could form the groundwork for a more comprehensive “reforging of the capitalist state”, encompassing such broader shifts as tighter controls on financial capital, a move from Gross Domestic Product to a more holistic “Abundance index” as a measure of national growth, and ultimately, discarding the profit motive in favour of human well-being as the central driving force in human societies.

If, in these technological and political anticipations, Bastani’s work suffers from the same weaknesses that most utopian works do—namely, an inevitable tendency towards the general and sweeping over the particular and detailed, especially in his descriptions of mass social change—it nevertheless offers an ambitious and necessary vision of radical social reform. Whether or not the world, in fifty or one hundred years, will be the world of FALC (or even the post-gender FALGSC) is up for debate—but Bastani is surely correct to insist that the days of neoliberal capitalism are approaching their end … and that we all have a stake in what comes next. Fully Automated Luxury Communism offers a hopeful vision of a possible future, one that, with its blend of utopian energy and careful argumentation, is worth taking seriously.

Thomas Connolly is an Irish lecturer and SF scholar who has published work on H.G. Wells and Arthur C. Clarke, and is currently compiling an edited collection of essays examining pulp SF magazines. He is the convenor of the Irish Speculative Fiction Reading Group, and writes about pop culture at The Critical Knot.

One thought on “Political pragmatism and utopian anticipation: A review of Fully Automated Luxury Communism”