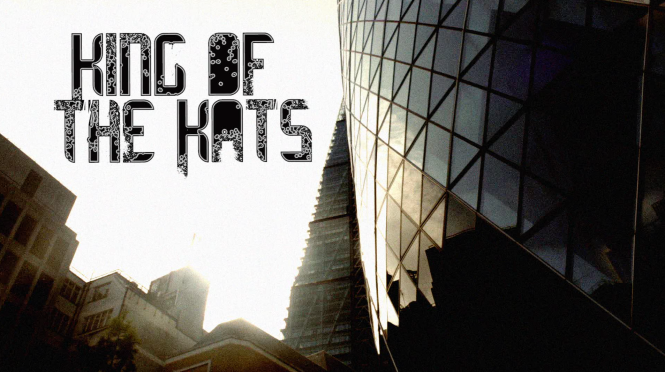 Making art can follow many differing paths: allowing the subconscious to do its thing; waiting for inspiration to strike alongside the time to realise craft, developing pleasure in process and deeper understandings of the self. The Neo Liberal market’s force for establishing one’s own name as a brand is a powerful psychological vortex, and for some, it is also imperative to follow the academic establishment’s call for deep research and being precise in defining one’s conceptual intentions. For myself, a commitment to the process of assemblage seems appropriate in an age of polarised economical ideologies; I see this as a way of presenting stratified social critiques –  an ethical choice.

My favourite indulgence in developing ideas is a long walk or deep soak in the tub – establishing time for reflection. I came up with a draft for my film in about two or three hours… I was twitchingly excited, as I’d conceived an idea to make a Cli Fi Western. My film King of the Katz, is an experiment in making political art. It acts as a critique on the values of capitalism and attempts to open up the narrative to a wider audience by using popular genres, humour and recognisable locations. Intention is also important in a work of art committed to social as well as aesthetic goals. I believe assemblage theory fused with Science Fiction has huge potential in making future narratives where we can critique the present effectively by using art as a political tool.

Assemblage, from the philosopher Manuel DeLanda, informs us content can be parameterized. Parameterizing allows us to take a concept, ideology, or thing and utilise a part of it for a different purpose. Imagine editing a song digitally – removing and adding parts as necessary. This is parameterising content, which in turn can be adapted to ideologies, subject matter, etc. Parameterising is a part of the philosophy and artistic notion of assemblage. Manuel DeLanda’s assemblage theory is a framework of synthesising and interweaving already existing entities and concepts to create new ‘wholes’. Wholes is the term DeLanda uses to accommodate a variety of social, organic and material entities, from political parties and social movements to rocks, water, life forms or man-made structures. These wholes in themselves all have many parts that make up their completeness in form. DeLanda explains:

Wholes may be separated into their separate properties; have irreducible properties and attach new properties, which can create new emergent wholes from differing interactions. This is where an assemblage creates something new. In essence, all things are not fixed or stable, the process of assemblage ‘amplifies’ the properties within existent properties. Assemblage also exists in fine art history. A term that became used from around the 1950s onwards, some of the foremost artists being: Robert Rauschenberg, who would take a walk around his block in Manhattan and make art from the materials he found, while Joseph Cornell made assemblages from Victorian found objects that were placed into wooden boxes with a glass panel to see into. Assemblage as an artistic medium can incorporate not just form, but content, as the form also includes: ideology, history and psychology. My Film, King of the Katz, is an experiment in assemblage in this fashion, conceptually and artistically. King of the Kats, is an assemblage of differing genres: the Western, Science Fiction, Film Noir, Folk & Fairy Tale and two differing theories of ‘critical realism’ from the philosophers Georg Lukács and Roy Bhaskar. The title of the film acts as a way of parameterizing already existing content. Misspelling purposely the title of the original fairy tale, as well as utilising a part of the original story where the protagonist’s singular journey is emphasised to deliver information – a message. The film’s important message acts as a critique of capitalism within the Anthropocene, utilising the two differing philosophies of critical realism. The first is from Georg Lukács, where in his book ‘The Meaning of Contemporary Realism’, he hopes for ideals of socialism to be embedded into realist literary narratives, to help combat the predatory nature of capitalism:

“critical realism embeds the knowledge that a socialist society would act differently from that of a capitalist society (…) through way of exploring potentiality in the narrative” (Lukács, 1962, 80)

“critical realism is not simply an affirmation /or assertions of socialism (…) it is itself a critical dialogue on the acts of socialism.” (Lukács, 1962, 93)

As we can see, Lukács ‘critical realism’ was created to employ an ideology critical of capitalism in literature, and for that critique to take effect in the real world. Lukács thinking that we need a ‘correct assessment of the future’ shows a paralleled perspective on socialism that exists within the science fiction genre. I believe that science fiction is the tool that fits best with Lukác’s agenda for envisioning speculative socialist narratives to explore positive futures away from capitalism.

When watching Star Trek The Next generation as a child, I admired how the series would focus parts of its narrative on our reality, pointing the audience towards a critique of certain social ideologies and structures. I remember in that very first episode, how the omnipotent creature Q set up a court to judge mankind for being a “dangerous savage child race… (who) slaughtered millions in silly arguments about how to divide the resources of your (our) little world.” And how the alien species, the Ferengi, were described as 20th-century versions of humanity – having a socio-political structure founded on the notion of profit as the ultimate hierarchical value of status. The last episode in that first series bookended the same questions on social values within capitalism and the nature of greed. In that episode, a survivor from a frozen cryogenic space capsule asks to check his finances on Earth, thinking that his monetary savings would have multiplied exponentially. Captain Jean-Luc Picard informs him that “People are no longer obsessed with the accumulation of things, we have eliminated hunger, want, the need for possessions, we’ve grown out of our infancy.” The man replies, “it has never been about possessions, it’s about power”, to which Picard replies, “that kind of power is an illusion”. In homage to these qualities in Star Trek TNG, I use science fiction as a methodology to critique present political concerns. For Roy Bhaskar, whose critical realism is notoriously complex, the philosophy spans out to encompass holistically many differing fields of knowledge: the natural sciences, the social sciences, philosophy, psychology, eastern spirituality, and history. Bhaskar’s philosophy is incisively post-human; he states that a move towards socialism would be advantageous to all sentient beings on the planet:

“We need to take philosophy seriously because it is the discipline that has traditionally underwritten both what constitutes science or knowledge and which political practices are deemed legitimate.” (Bhaskar, 1989, 1)

“(Critical Realists…) hold that we will only be able to understand – and so change – the social world if we identify the structures at work that generate those events or discourses.” (Bhaskar, 1989, 2)

“I think it’s vital to conceive Marxism as a research program, initiated by Marx but no more completed by him than Copernicus completed the revolution in thought (…) Socialists need to take questions seriously; to build, if you like, models of feasible concrete utopias, if socialism is to become the enlightened common-sense of our age. (Bhaskar, 1989, 5)

As we can see, Bhaskar is creating an encompassing philosophical discourse that can holistically critique the nature of capitalism. A practical example can be found in the opening lines in Naomi Kline and Al Lewis’s documentary ‘This Changes Everything’ (2015).

“The story the Royal Society pioneered in the 17th century (…) Science had granted men god-like powers. The earth is a machine, and we are its engineers, its masters, we can sculpt it like a country garden, we can extract whatever we want (…) these scientists turned the mother, into the motherload (…) this story is where the long road to global warming began (…) stories are something we can change!”

This is the kind of philosophical ‘under-labouring’ that Bhaskar champions to help us identify our social agency. The Royal Society was key in influencing the ‘man’ over ‘nature’ narrative, which is set deep within our educational and philosophical understandings. Yet there is a growing number of voices who critique this notion of ‘mankind’ as an oppressive conqueror of all, where nature is merely a material to be exploited. With our deepening climate crisis, this philosophising makes complete practical sense.

Another aspect of critical realism I assembled into the narrative was the use of spirituality: creating a ceremony as well as discussing how spirituality plays a role within the lives of the peoples of the Isle of Katz. Bhaskar claims that it is the ego itself that causes much of our social ills, and for one to truly understand themselves, a deeper connection with the self has to be practised.

Both fields of critical realism, in philosophy and art-making, are founded on principles in Marxist socialism. My film is an exploration aimed at furthering this ideology. Here I have outlined the thinking and reasoning behind my experimental film, showing that assemblage and science fiction hold important potential for the fun and criticality effective fictional world-building, which can help influence positive socio-political change.

David John Beesley is currently a PhD research candidate at the University of Readings Fine Art Department, where he is exploring critical realism by writing a Buddhist / Spiritual Cli Fi novella and creating collaged assemblages that critique capitalism.