Vector 266 arrived with the post yesterday, along with Focus and Quantum, an occasional BSFA newsletter. It’s real, it’s approximately on time, and it might inadvertently convince recent BSFA members that Vector comes out slightly more often than it does, coming so soon on the heels of the previous issue. Really, the journal is still quarterly.

This is the 2010 year-in-review issue, featuring retrospectives on the novels, television shows, and movies of 2011, along with an article on Stephen Lawhead’s Pendragon cycle, and two new column. One, (previously in Matrix) is from Terry Martin of Murky Depths. The second, “Kincaid in Short” from Paul Kincaid, is on Kate Wilhelm’s “The Infinity Box” and, bafflingly, we collectively managed to omit it from the Table of Contents, so it’s particularly important you know it’s there, starting on p. 34.

As long as I’m providing corrections: the version below includes Jonathan McCalmont’s name correctly spelled, and, where page numbers are provided, corrections to those too. 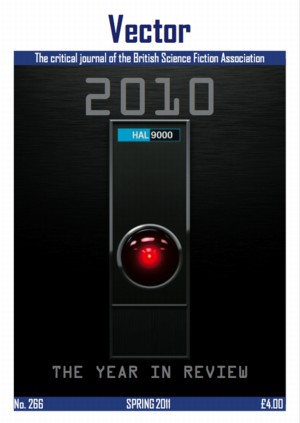 I’ll post the full list of books reviewed in a week or two, when our review’s editor is back from holiday.

Vector welcomes letters of comment, or feedback on the forum.