Host Glyn Morgan (a former editor of Vector) was joined by two distinguished science fiction authors: Adam Roberts and Jeff Noon. Adam is a lecturer in nineteenth-century fiction at Royal Holloway and the author of seventeen books, including the British Science Fiction Association Award-winning Jack Glass. Jeff is a former punk, doyen of the 90s Madchester rave scene and author of eleven books, the first of which, Vurt won the Arthur C Clarke Award in 1993. Both have recently published new novels; Jeff’s A Man of Shadows is published by Angry Robot; Adam’s The Real Town Murders by Gollancz.

Both novels blend crime fiction and science fiction, challenging the genre boundaries. A Man of Shadows is the film noir-influenced story of a 1940s-style gumshoe private eye searching for a teenage runaway, while The Real-Town Murders follows another private investigator trying to solve a case that seems impossible. The idea for the murder came from Alfred Hitchock, who posited: what if a dead body was discovered in the boot of a car that had been assembled by an automatic factory with no human intervention? Hitch said that if he could work out how the body got there he would make the film. He couldn’t, so never did and now Adam Roberts has picked up the challenge.

Each author has explored this genre combination before; Adam’s Jack Glass is a locked room mystery inspired as much by the Golden Age of Detective Fiction as it is cutting edge science. Jeff’s Pollen followed the efforts of a female detective in a radically altered Manchester, trying to solve crimes perpetrated by characters from English folklore made real by the same technology that has reanimated the dead.

Both books had different titles proposed; Jeff wanted to call his Between Dog & Wolf, because dusk makes it hard to see which animal is in front of you and thus know how much danger you’re in. Adam wanted to call his novel The R!-town Murders (the R stands for Reading), but was told that the words would confuse a scanner for book titles used in the distribution. These tensions, based on interpretation and understanding, seem entirely apt. Both stories are about the limits of perception, using genre to examine our relationship with time and, intriguingly, light.

In The Real-Town Murders, AI-monitored CCTV is no use whatsoever; some other perception is required to help solve the crime, but what? Meanwhile, the next generation Internet is called the Shine; a name that feels both illuminating yet also superficial. People stay immersed in the Shine, to the extent that society as we understand it starts to break down. It also restricts physical movement and thus enables government to put more effective surveillance in place.

A Man of Shadows is set in a city where the lights never go off, and the narrative dramatizes the effect this environment has on time. Without darkness, there is no night and by implication no diurnal change either. Time thus begins to liquefy, becoming less deterministic and more personal. Under ceaseless illumination, time slows down; implying that it can ultimately be stopped.

In The Real-Town Murders, the protagonist, Alma, is restricted in all her actions to four-hour windows because she has to get home to care for her sick lover. To move around future Reading, Alma must organise her time carefully to remain employed, balancing professional and personal duties.

In The Real Town Murders Alma’s duty as a carer means she cannot join the rest of humanity in the rapturous, revelatory Shine. She is left behind in a drab world where the sky is ‘the colour of old men’s hair’ amid a landscape of robots people have forgotten to switch off. Nyquist (‘Night Quest?), the protagonist of A Man of Shadows, has never left Dayzone; he is scared of the dark and of Dusk in particular.

Adam and Jeff are working on sequels. Until now, Adam has written stand-alone books, so this sequel will be his first. Influenced by Kubrick rather than Hitchcock, the story is inspired by the quasi-science-fictional workings of real-world debt. 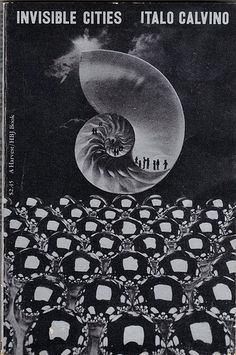 Jeff has long been an admirer of Italo Calvino’s Invisible Cities; a collection of very short stories about different environments, each of which has something strange about it. Jeff wants to develop a book series based on this narrative principle; however, whereas A Man of Shadows is about the effects of total light, the next book will concern another urban strangeness informing the crime Nyquist must investigate.