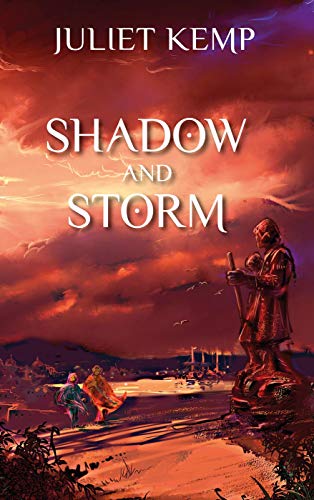 Can you talk a bit more about queer representation in both books?

There is a lot of queer in these books, very deliberately. Personally, I’m not so interested in writing stories about being queer; what I want is to write stories which are about other things, and in which people just happen to be queer (LGBTIQA+). I want to see people like me and my friends getting to have exciting adventures, in a way that I didn’t get to as a kid — and indeed for much of my adult life, though it’s getting much better now. So that’s what I write.

You’re a really busy person — among other things you home educate your eight-year-old. Are you a ‘regular-backside-on-seat’ writer, or are you a ‘snatch-time-when-you-can’ writer?

I am a regular-backside-on-seat writer — my partner and I both work part-time so we share kid-duties day and day about. So I have writing time every other day. I’ve done Nanowrimo a couple of times since my kid was born and for that I become a snatch-time-when-I-can writer, but I can’t keep that up. I find it very difficult to write when someone is performing a half-hour Terraria monologue in my other ear!

My ten-year-old is actually enthusiastically telling me about Sonic the Hedgehog right now. I empathise!

I can write quite a lot in a day when I’m concentrating though — 5,000 words is reasonable, when I’m doing a first draft — so I think it balances out against the “snatch a few words at a time more often” model. Editing is much slower. MUCH slower.

My college years of audio-typing in the vacations as a medical secretary did pay off in typing speed at least. Not to mention far too much time spent on assorted internet messaging services over the years …

Yes, I’m a fast typist too. I did lessons at school.

When I was eight my mum was changing jobs and got her old typewriter out of the loft and said I could only play with it if I ‘played’ using her typing course book. I only got the very basics at that point, but it was a very useful experience.

I started contacting agents at the same time as submitting to publishers who had open submissions — which is not that many these days, but Elsewhen Press were open at the time. As I recall, they read a sample, then asked for the full MS, and then got back to me saying that they liked it and offering to publish it. So I stopped contacting agents. I had the flu at the time and spent a while being slightly unsure if I was reading the email correctly!

That was Feb 2018, and the book came out as an e-book in July 2018 and then print in autumn 2018 — Elsewhen are an e-first publisher. So between the contract and the publication there were edits and proof-reading and cover design and so on. And a really gorgeous map. The cover is beautiful too. The same artist did the Shadow & Storm cover, which I was really pleased about.

The sequel was a tiny bit slower – I submitted it in May 2019 and it came out in January 2020 as e-book — but still fast compared to larger publishers. I’m currently working on another one but it’s only in the first draft stages at the moment, nowhere near showing to anyone at all!

That’s exciting! Is it a sequel, or is it something new?

It’s a sequel, though the books are all readable stand-alone; it’s a series in the “more books in the same universe/same characters” sense rather than the “trilogy (or whatever) forming one whole story arc” sense.

Did you publish before The Deep and Shining Dark and Shadow and Storm?

I had a novella out in 2018 with the Book Smugglers — that’s YA SF, a ‘second contact’ (rather than first contact) story set on an ocean planet with a teenage protagonist. Everyone uses xe pronouns. It’s called A Glimmer of Silver. I’ve also had a bunch of short stories published in various places — most recently one in last year’s Portals anthology by Zombies Need Brains, and in Vulture Bones and Translunar Travelers Lounge, which are both online magazines. I have a couple of stories forthcoming this year but can’t remember at the moment whether I’m allowed to talk about them yet!

Exciting! What do you consider formative reading or culture for you?

Ooh good question! I was talking at Picocon the other weekend about reading Lord of the Rings when I was about eight, which was definitely a formative reading experience and completely blew the top off my head. I read a lot of the Terrance Dicks kids’ Doctor Who books around that age, too. And I remember reading A Rag, A Bone, And A Hank Of Hair by Nicholas Fisk as a kid.

It has a twist at the end which I will not give away (it’s a great book!), but it was the first time I’d encountered something that did that quite so cleverly. That was another WOW moment, and gave me a lot of thoughts about the extent to which you can trust your own mind … pretty full-on for nine or ten. Structurally it does the Chekov’s gun thing of setting it up / giving you clues early on, clues that you don’t even notice at the time. So clever.

As a teenager I got into David Eddings and Anne McCaffrey, and quite a bit of ‘classic’ SF, Asimov and Clarke and so on.

Did you have a big book collection, or was this library reading?

The children’s books were mostly public library. I did have a fair few books at home, but it was not possible to keep up with the amount I read without extensive library use. The Eddings and McCaffrey we had at home — my mum was reading them too. My school library wasn’t terribly good for SFF and I had a preference for SFF — though not an exclusive one — even as a kid.

That’s so great, sharing reading with your mum.

I also read a lot of the category romances she borrowed from the library, later on! And the Cadfael books, we both liked those.

Did you have a preferred romance author? It fascinates me how many SFF reader friends also love romance.

Were there TV shows that influenced you?

I didn’t watch all that much TV as a kid … I did watch Doctor Who when I was small but then it stopped when I was still in infant school, I think. I prefer books to TV, in general, still. I read very fast! Although of course they’re very different ways of telling stories and you can do quite different things with them. More recently I’ve watched Black Sails which is bloody great.

You were recently a Guest of Honour at Picocon, the one-day convention organised by Imperial College London’s Science Fiction and Fantasy Society. What was that like?

It was great! Apart from the bit where I had laryngitis, which I have to say I do not recommend at all, never mind when one is expected to give a talk and then be on a panel. However, I croaked my way through it and hopefully people enjoyed it. The essay version of the talk is online.

How did it feel being Guest of Honour, having been part of Eastercon’s programme committee?

It’s a bit weird being on the other end of the organising, yes. And I used to work at Imperial, so I know the building and the campus very well too. The Picocon committee were lovely and looked after us very well.

Thank you, Juliet. It was lovely to talk to you.

Alison Baker is a senior lecturer in education at University of East London. She is writing her PhD thesis entitled “White Working Class Children in Children’s Fantasy Fiction”. She has 10 years’ experience of teaching on undergraduate and postgraduate teacher education programmes. She previously taught in Early Years, Primary and Special Needs settings in London and Yorkshire. She is likely to explain that the Weasley family have considerable cultural and capital in Harry Potter’s world with the slightest provocation, whether at a fan convention or not.

Juliet Kemp is a queer, non-binary writer of fantasy and science fiction who lives in London. Their novels The Deep and Shining Dark and Shadow and Storm are available from bookshops and online.

One thought on ““More politics, more magic, and more queer”: An interview with Juliet Kemp”